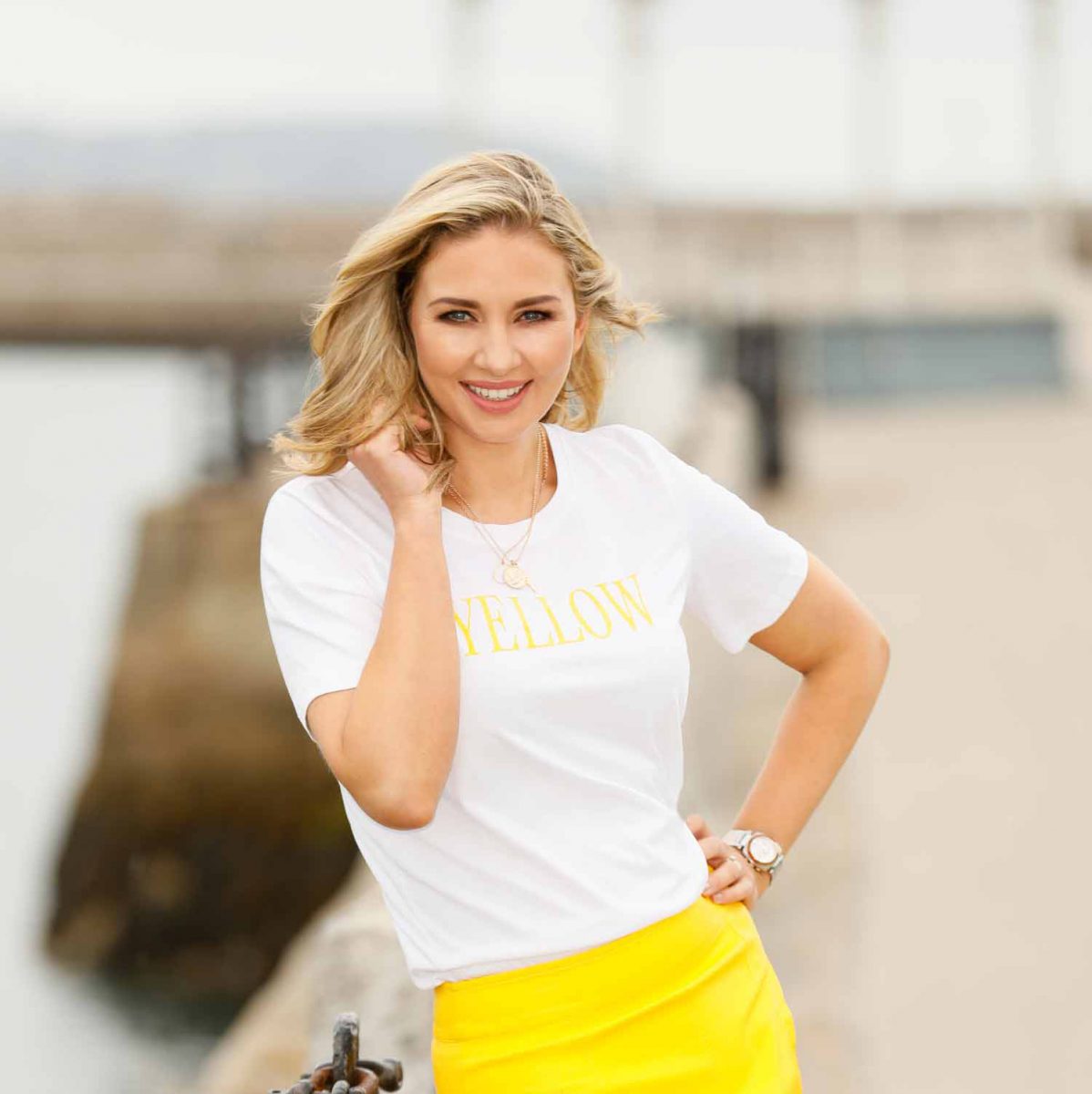 In some schools of thought, it is said that our fate is sealed from the very moment we are brought into this world, that our cards are dealt and there is no reshuffle. But every now and then, Lady Luck smiles favourably on the bold and the brave, the risk takers and the chance makers, and our fortunes have a way of falling into places that we never dreamed possible. Despite having sculpted a prosperous career in the field of marketing, it was the bright lights of broadcasting that made Anna Daly the household name she is today. The Weekend AM Virgin Media anchor chats to GALWAYnow about her serendipitous move into television, her newly launched website and the power of women in media.

A native of Templeogue, like most of us leaving school, with no clue what to venture into, marketing eventually became Anna’s calling. After four years of study, and some time travelling, the business graduate scooped a job with Bank of Ireland. “To be honest, it wasn’t quite rocking my world,” she confesses. “I moved into radio for a short time in more of a sales role, and that’s what led me to TV3 at the time.” With her career trajectory looking lucrative, and a promotion to marketing manager under her belt, the blonde beauty was asked to do a screen test, but immediately turned down the offer. “Of course, being a marketing manager for a television station means you end up in meetings with various different producers and opportunities arise. But I declined straight away.”

A TOUCH OF FATE

“I happened to mention it to my boyfriend, now husband, and he was in disbelief that I would say no with such immediacy, without even giving it a chance. I knew deep down he was right, and that I might regret it 20 years down the line.” Anna decided to meet her confidence issues head on, and began studying on the Bill Keating Course, which focused on the areas of presenting, directing and production. Soon she found herself as a presenter and reporter on the hugely successful Ireland AM. “I went back to the powers that be, although I was certain it was going to be too late and asked for a second chance at the screen test. That’s really how it all began. It was absolutely a matter of confidence, it’s something I have come across a lot in my career. I’ve attended countless conferences and events for women in business, and time and time again the same issues arise. Women, when looking at a list of criteria for a job, they see all the things they can’t do or don’t have experience in, and men do the exact opposite. The things that they do jump out of the page, and the rest they wing it. We need to be a little bit more like that, I think,” she affirms. “My husband and I are a great balance, he encourages me out of my comfort zone.”

THE PURSUIT OF HAPPINESS

Despite her newly gained self belief, being under the microscope of the public eye does not come without its difficulties. Living a life online can offer a lot of opportunity for negativity and antagonism so Anna maintains an authentic presence is key for giving online trolls the cold shoulder. “I don’t feel too much pressure to look or think a certain way because I think if you’re trying to formulate a brand it’s not really going to work. Be real, it’s far more endearing. My marketing background has certainly helped me in my career, but I still am totally myself. Trolls are few and far between, but when you do get one, it can frighten you. It’s unexpected. You have to remember, for every one negative comment, there are 100 kind words. I think it’s imperative to let those comments give you some balance and perspective on things. Nasty comments say more about the person that sends them, than those that they are about.” Now an anchor on Virgin Media’s Weekend AM with co-presenter Simon Delaney, landing the role was not without perseverance. An ambitious and driven person, the mum of three is always in pursuit of a challenge. “After a few years of presenting Ireland AM, I wanted something different, so again I approached the powers that be and enquired about a Saturday version of the show. I was rebuffed because of finances, but I told them I’d just keep coming back with ideas!” she laughs. “I wanted to be an anchor and needed to create something for myself. A year later I got the phone call to say that not only was the Saturday show going ahead, but a Sunday show got the thumbs up too. Naturally, I jumped at the chance! It’s been fantastic being a part of something new, a new brand, without inheritance. It’s been a huge success and I’m so proud of that.”

With her hugely deserved anchor position in the bag, a role that so many women are striving towards, the broadcaster is feeling positive and hopeful about the role of the woman in the media. With some controversial gender pay gaps having been exposed in recent years, Anna maintains that it’s a good time to be female. “I’m going on my local surroundings here but the head of daytime, one of the bosses, Victoria is female. One of our commissioners who came from RTÉ, Aoife Stokes, is female. Dee Forbes, the Director General in RTÉ, is female. I do think the landscape is changing and we are getting more representation at senior management level. We do need more at board level, but I think we’re moving in the right direction.”

“I don’t compare my salary with anyone else.”

I just want to know that I am on a fair deal for the work that I am doing. Because when you walk out of the building you are always promoting Virgin Media, as well as the show, especially when it’s a passion project for you. I’ve always been looked after, and that’s all I ask.” Determination and endurance have not only landed Anna an often labelled ‘pipe dream’, but have sent her to the four corners of the world, chatting to some of the biggest celebrities of our generation. Yet the humble star maintains a certain sense of charm. “It has been an incredible journey, to be honest. One minute you’re in the studio, the next you’re sitting in a hotel room with Kate Winslet thinking ‘oh my God we need to be best friends’, but she is definitely not thinking that! I actually think I told Khloé Kardashian that I was available if she wanted an Irish friend!” she laughs. “The likes of Helen Mirren and Graham Norton have been some of my favorite people to interview, they were just so cool, calm and collected. A-list people are always so down to earth. When I asked Helen Mirren what her advice would be for someone trying their hand at acting, I was expecting something incredibly regal, and high-brow. She responded by saying ‘I just wish I told more people to f**k off!’ What a response, but she’s so right!”

LOOKING TO THE FUTURE

With her three boys growing up right before her eyes, and her family very much in place, Anna is looking to focus on her time and career. After recently launching her brand new website, annadaly.com, the 42 year-old is looking for a place unwind. With fashion, interiors, property and a selection of her musings, the site gives an intimate cross section of the star. “The website needs to be about things that I love,” she explains. “When I began lots of people assumed it was going to be a parenting website. People presume because you’ve got three kids, that all you’re doing is looking at parenting content. There is the odd reference to being a parent, obviously, but for me, it’s an escape from the daily grind. Anything that catches my eye that day or week. That means if I am putting it together at one in the morning, it doesn’t feel like a massive chore. I do hope to commercialise it and monetise it, but I do need help. I foolishly undertook it thinking I could do it all, I can’t. For me though, it was important to have an outlet to express myself and to merge all my content into a single place. It’s a bit of me!” An anchor role on a national flagship breakfast show, a wife, a mum to James, Euan and Rhys, an ambassador for UNICEF, the Maria Keating Foundation and Mothercare, as well as a newly launched website – is there room for much more? Apparently so! The blonde beauty has just announced her initiation as a columnist into the her.ie family. She praises her loving husband, Ben, and their tag teamwork as a huge contribution to her success. “I have an incredibly flexible husband who is just so lovely and so sound!” she explains, tenderly. “He is so understanding of the nature of my business, first of all, the last minute call-ups for all sorts of things, and then the weekends when I’m not around for rugby and soccer and swimming and all the things that the kids are involved in. He handles it all. It works! I mean it won’t work forever, but it works now.” It looks as if this tag team won’t be hitting the subs bench anytime soon, with a plethora of projects in the pipeline for our favourite broadcaster. “I don’t necessarily have a conclusive answer to what’s coming up. I have a lot of ideas. I’m in the middle of talks about some of them, and I am incredibly hopeful they will come to fruition. I don’t want to jump the gun, but I don’t want to sound coy either,” she laughs. “I know people often say they have this and that coming up, and it turns out to be absolutely nothing. All I can say is watch this space!”

Catch Anna, with co-anchor Simon Delaney on Weekend AM from 9am until 12pm, live on Virgin Media One, or have a read of her musings on her website www.annadaly.com

Holly White’s latest cookbook Vegan-ish includes over 100 of delicious and everyday plant based recipes she ... 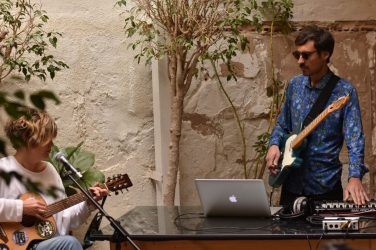 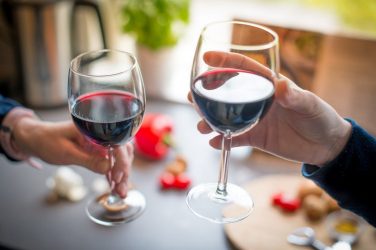