“As soon as I read the script, I knew it was something special.”

The 90s in Northern Ireland was a time enveloped in conflict. Watching gun-wielding foot soldiers strewn across the news, patrolling through the streets of Northern Ireland, and tales of peace treaties and mass slaughter being fed to us on a daily basis, it’s hard to imagine every day life in such a place. Yet Channel 4’s new smash hit show, Derry Girls, has done just that. Creator Lisa McGee transports audiences to a curiously simpler time with the help of her five leading characters. Despite the backdrop of bomb scares and Orange parades, our lovable Derry Girls are fretting over school trips, chippy orders on a Friday night, history exams and losing (the rest) of their virginity. It’s honest, it’s raw, and it’s relatable. GALWAYnow caught up with one of the most beloved, complex and outrageous lead characters, Clare Devlin. Played by Nicola Coughlan, the Galway girl chatted to Rebecca Reilly about the trials and tribulations of acting, her upcoming projects, and using Nadine Coyle as inspo for her Derry accent!

Despite having a steadfast love for theatre from a young age, Nicola claims she was self-conscious and apprehensive about her talent. Having delved into the world of acting at the tender age of 14, drama, as a profession, was a foreign concept to a young girl in the west of Ireland. “I was never one of those Billy Barry stage kids,” she laughs. “I think I was just a bit weird! I felt crazy for wanting to act. Claire Power was my drama teacher all through school. She also acted as my agent and helped me get into professional auditions!” Soon the budding thespian was working with Magma Productions and Telegael here in Galway doing voiceovers for cartoons, her love for accents getting its first debut. It was from here the Oranmore native got her first big break, much to the surprise of her peers. “I never told anybody I was acting. I did a short called The Phantom Cnut, which was screened alongside Intermission, and my secret was out!” Upon graduating from NUIG, having studied English and Classics, the fresh-faced performer was realising her dream and was happily on her way to drama school. “I was incredibly green when applying to the Oxford School of Drama. I just decided to go for it! Of course, I did a horrific audition and totally thought I was not cut out for it, but I got in! I still think they just took a chance on me! But once I was there, I really felt like I found my tribe. It was so gratifying. As much as I loved English in college, taking words from a play off a page and back on a page did not make my heart soar.”

The show follows four teens from Derry – Erin, Clare, Michelle and Orla, alongside a ‘wee English fella’, James, and surrounds their lives in war-torn Northern Ireland. With predominantly female leads, the show is a fresh splash of comedy genius with a commemorative flashback to more arduous times. “As soon as I read the script, I knew it was something special,” Nicola explains. “I had never seen girls presented in such a way. I immediately fell in love with Clare and her first line ‘I’m not going to be an individual on my own!’ I know straight away with a script, and there was never a doubt in my mind about Derry Girls. I was worried about a backlash against women in comedy, which often happens, but the response was insanely positive!” With a somewhat delicate subject matter, the show manages to draw a perfect line between the banal and tragedy. “Being from the south, I feel we can only speculate on what went on up there so I felt a great responsibility to ensure that the Troubles were showcased in a sensitive way,” she admits. Jamie-Lee and Saoirse (AKA Michelle and Erin) are the only true Derry Girls, so I often deflect to them when we talk about it. At the end of the day, we didn’t have a clue down here.” Having two bona fide Derry natives was a fringe benefit when it came to fine tuning their accents. “The rumours are true, I did use Nadine Coyle to hone my accent by watching old recordings of her Popstars days! Jamie-Lee and Saoirse were so just brilliant during filming. If there was anything we were struggling with, they would record it for us so we could practice ourselves. We did have accent coaches too though, I can’t give Nadine all the credit!” Clare, as deliriously hilarious as she was, certainly had some poignant moments throughout the show, none more so than the subject of her sexuality. “I was incredibly nervous about shooting the scene where Clare came out as gay,” Nicola reveals. “Again it’s a tricky subject matter, and one that I wanted to represent appropriately, which can be difficult in a comedy. I had known the entire time that Clare was gay, but the rest of the cast found out at the eleventh hour. I spent a lot of time with our director Michael Lennox trying to get the balance right, to represent appropriate feelings and not make it a farce, but still leaving room for a laugh. I think we got it right!” With up to 15-hour days on set, filming was a gruelling process but one that Nicola has a great deal of respect and thanks for. “Shooting the final scene, where Orla, played by Louisa Harland, is in the talent show was so emotional. There were a lot of tears that day.” The scene shows the five protagonists on stage at the school talent show – dancing, laughing, and leading normal teenage lives – while their families stand around a television watching the aftermath of another horrific bombing. “It was a super emotional day, I got full chills reading the script!”

For our full interview with Nicola Coughlan see our May GALWAYnow issue! 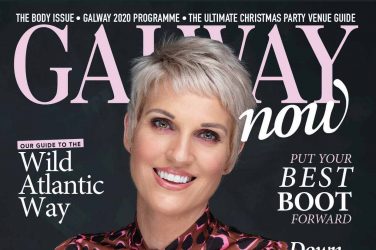 Our stunning GALWAYnow October issue is HERE! The magazine is bursting with everything you ...

To celebrate their silver anniversary, Wineport Lodge are offering a fabulous prize of an ...